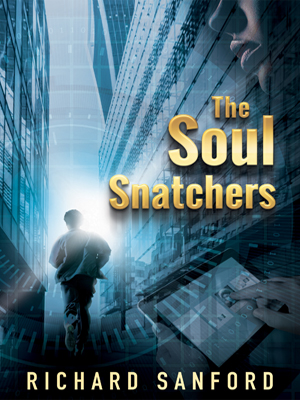 Tzaro Janssen, a seismologist in a next-gen lab in the San Juan Islands, is toeing a fault line. His girlfriend Therica has become… not herself. Stories like hers are lighting up media around the globe—psychotic breaks, social isolation, explosive violence. And no known cause.

A chilling discovery on Therica's phablet fractures the world Tzaro knows and propels him into a strange, altered one. At the center is Therica's obsession, the mega networking platform Wundrus.

With the fates of Therica, his son Derek, and billions of the socially interconnected in the balance, Tzaro and the rag-tag team who join him—Calvin Carmody the professor of ancient languages, Svetla the Bulgarian Guber driver, Wes the old-school programmer, and hardheaded Morgan, rebel with a cause—plunge into a race against madness.

In a future world not so distant, in a cyber cell in the shadowy foothills, the soul snatchers are watching, and waiting.

I thought that The Soul Snatchers by Richard Sanford was a fascinating and fast-paced read. There was no good reason to put the book down... The world building was well written and I loved the fast pace. I am usually pretty good at solving mysteries, but was blown away by this one.

I really enjoyed this novel as it traveled both through the Sci-Fi and the thriller/mystery realms... I was also on the edge of my seat, waiting to find out what would happen next... Cyberterrorism is becoming more and more frequent and people are losing themselves within social media. As I was reading, I felt as though the fate of my own world was at stake, and I had to continue until I knew what the ending would be... Good or bad, or both.

The Soul Snatchers is an energetic and entertaining romp through Cascadia... a fast-paced and thoroughly enjoyable science fiction thriller with Sixties throwback touches. Enjoy!

Stephen Billias, author of The American Book of the Dead & Quest for the 36